Back in February, I was lucky enough to be able to visit Japan for my friend's 30th birthday. While there I amassed quite the collection of Kit Kats. Unfortunately shortly after I returned home, the world went in to lockdown due to (the still ongoing) COVID-19 pandemic. While the hunt for toilet paper occupied the early days of the pandemic. By the time summer had set in I had forgotten about my suitcase full of snacks that I now had no one to share with. It was pretty depressing so I postponed thinking about it. Now that the year is winding down and I've found ways to share my spoils, I want to finish reviewing my haul.

Believe it or not, this isn't even a complete record of everything. There are a handful of items I picked up elsewhere or ate while I was overseas. If I manage to recall them all I'll write about them later. 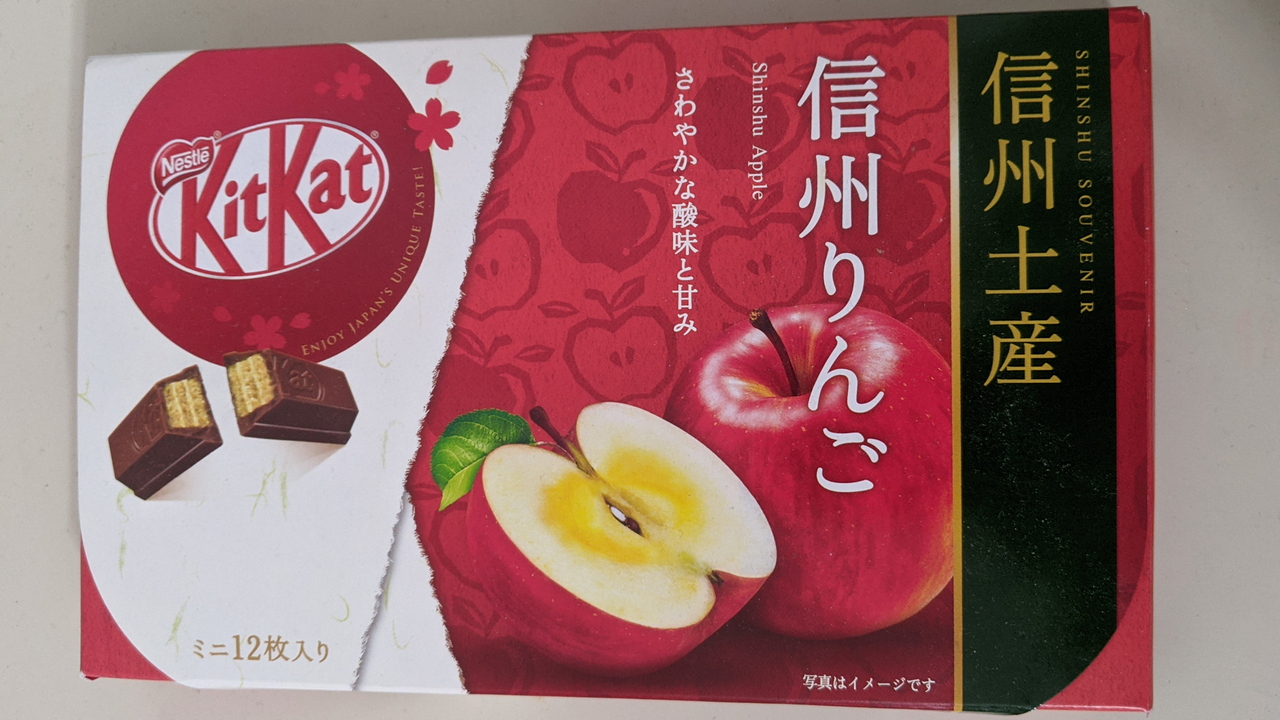 This flavor is both interesting and memorable. It has a sweet apple fragrance that competes with the chocolate itself for your attention. THe flavor profile is very heavy on the apple though, but it's quiet pleasant. I'd definitely recommend it fans of the fruit as apple and chocolate are not a combination you very see often. Also of note, this Kit Kat is named for the old Japanese province of Shinshū (信州) which would become modern day Nagano Prefecture. 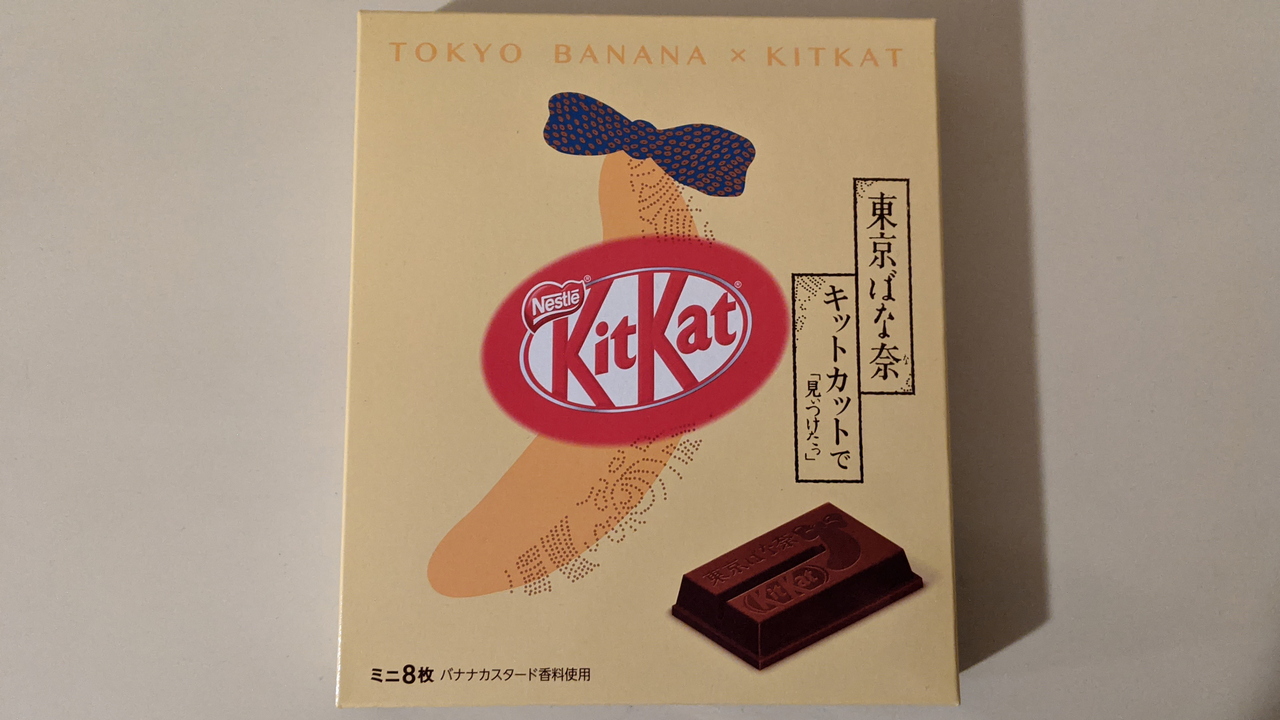 The choco banana is a running gag in both anime and online, but much to my surprise Tokyo has embraced it as a reality. This Kit Kat, named for a popular kind of cream-filled sponge cake that is Tokyo's official miyagegashi, lives up to it's namesake. Chocolate encapsulates crispy wafers with a mild banana flavor throughout. It's an uncommon combination here in New York but definitely a tasty one. It also happens to be one of Tokyo's regional Kit Kat flavors. 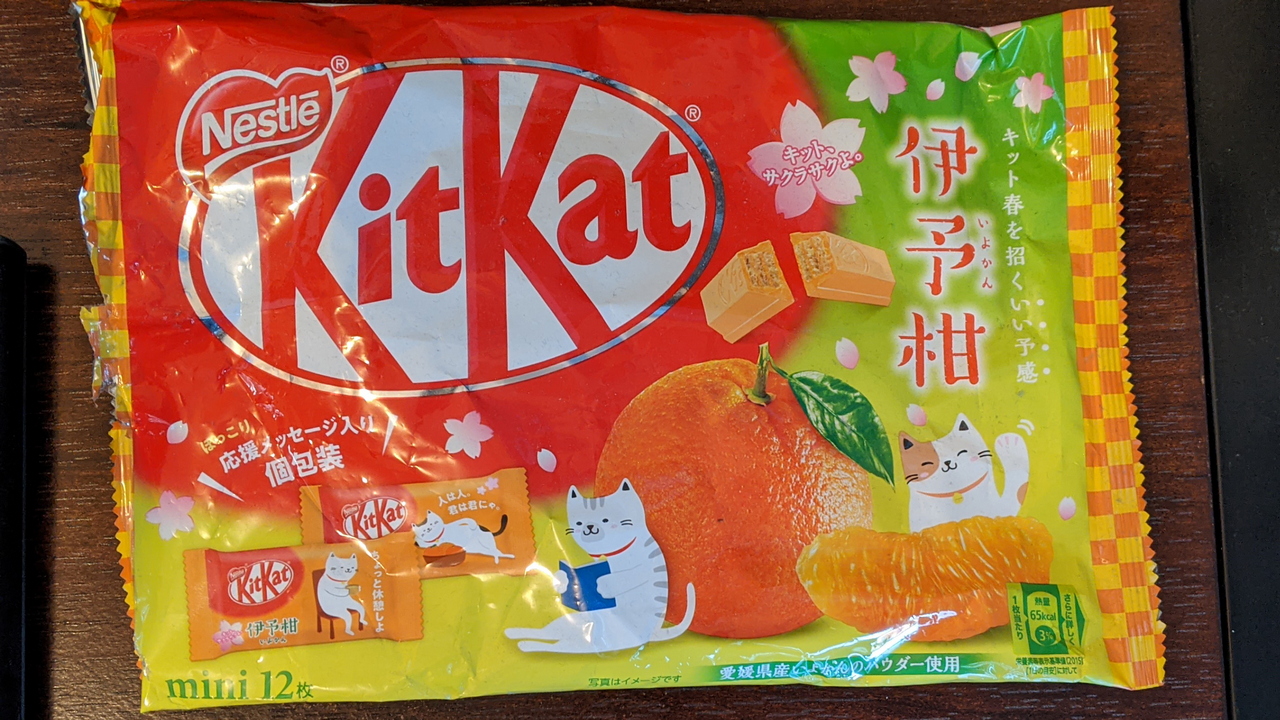 When a strong citrus scent punctuates the still-chilly air, you know these Kit Kats will be there. Sweet and every-so-slightly tart, the Mandarin Orange flavor truly delivers. I absolutely love it! 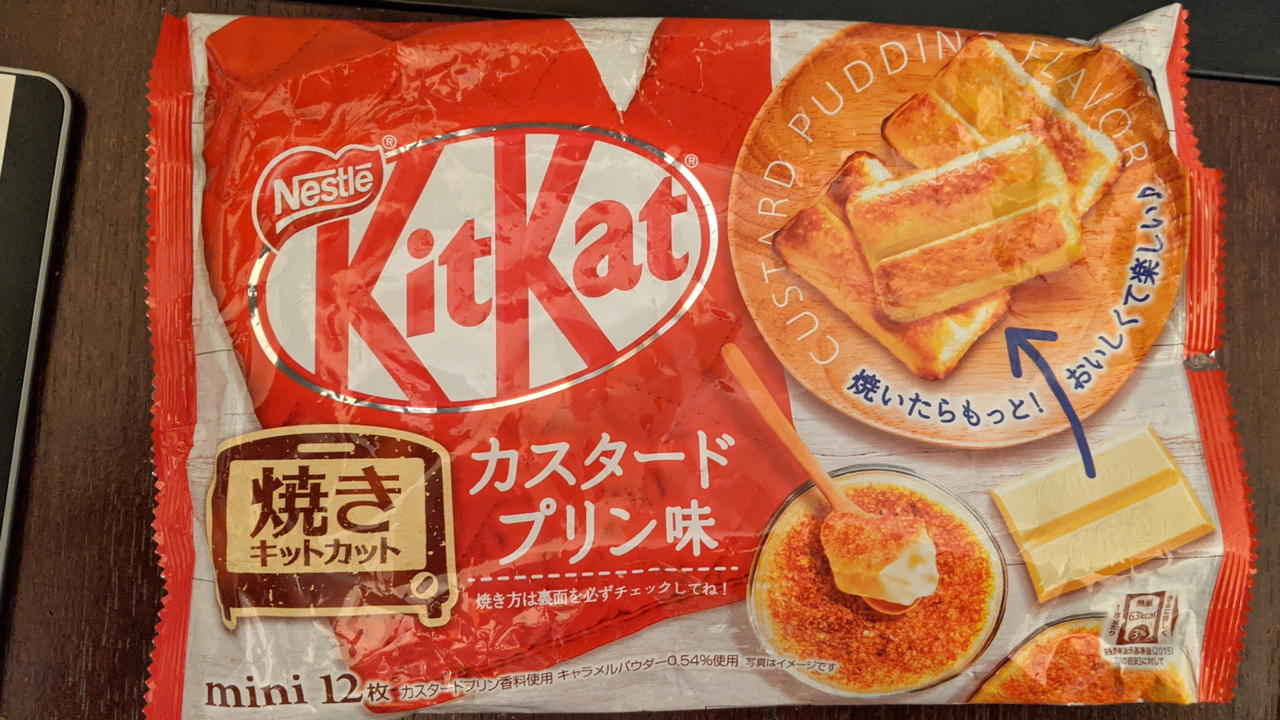 Kit Kats are tasty snacks but this flavor elevates them to a full blown dessert. A vanilla custard flavored white chocolate exterior conceal 2 crème brûlée flavored wafers. I don't know how they manage to synthesize the complex flavors of the caramelized sugar layer of this well-loved dessert but it is of no importance. This flavor is excellent both as a treat and as a finishing note to a meal. 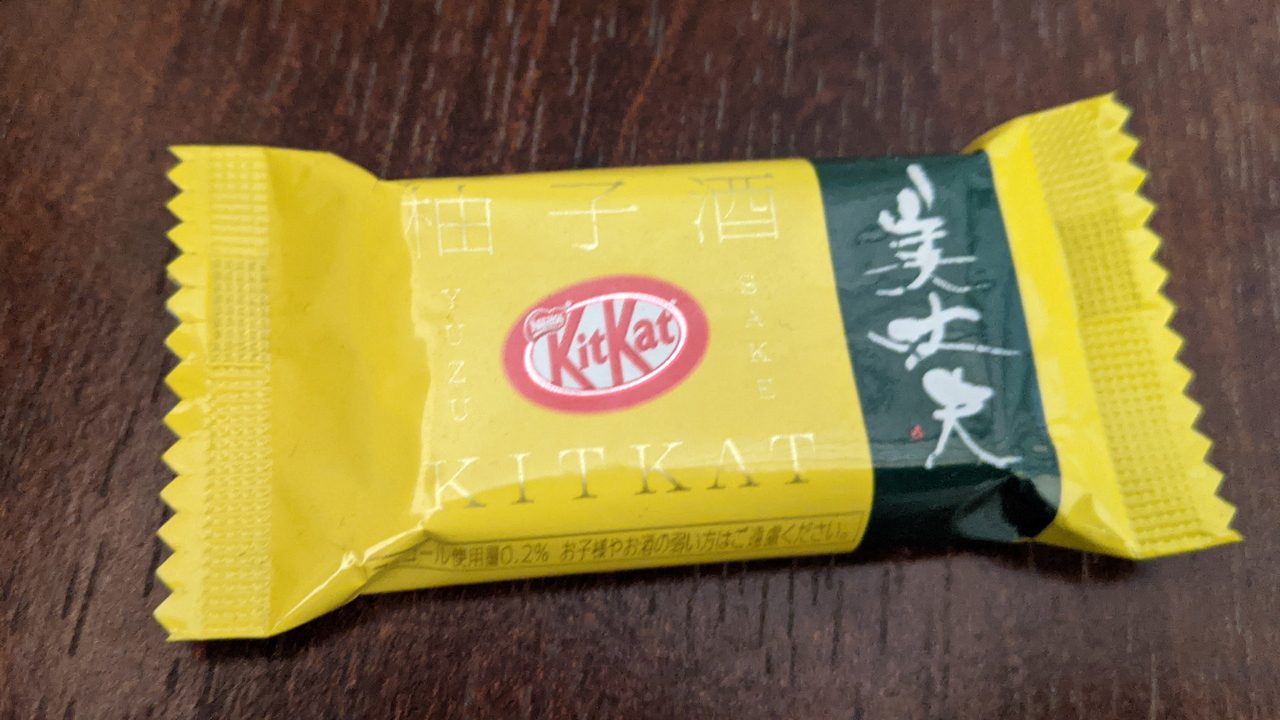 This Kit Kat converts what is a very adult beverage into snack form. A subtle white chocolate with a very bright and citrus-y scent hides 2 wafers with sake powder in them. The tart yuzu overpowers all of the other flavors. I recommend this one to fans of yuzu flavored things. You may not enjoy it as much as I did if you approach it looking for a sake flavor. 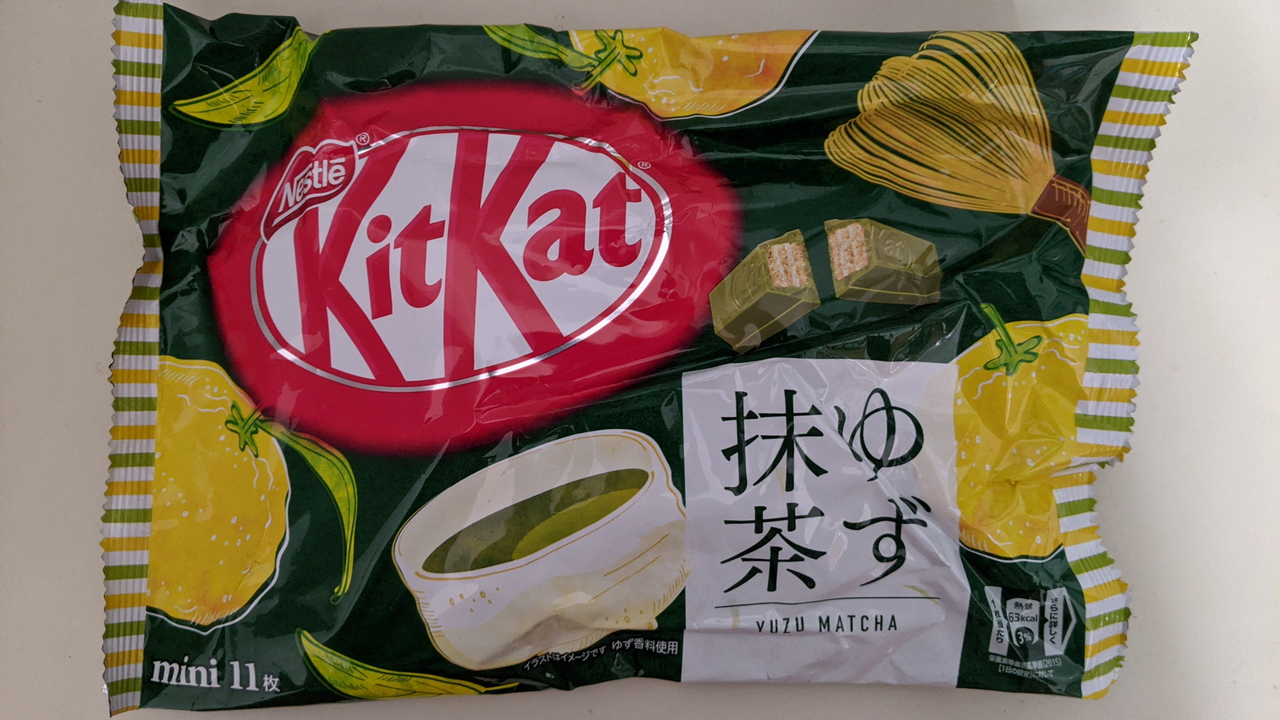 In keeping with our theme, I have a second yuzu flavor to try, Yuzu Matcha! This Kit Kat offers an inviting matcha scent with hints of yuzu. The real test comes in how it tastes though. Both matcha and yuzu are strong flavors and they assert their dominance well here. Combined it makes for a very smooth and balanced taste. These are definitely a hit with me so I fully recommend them. 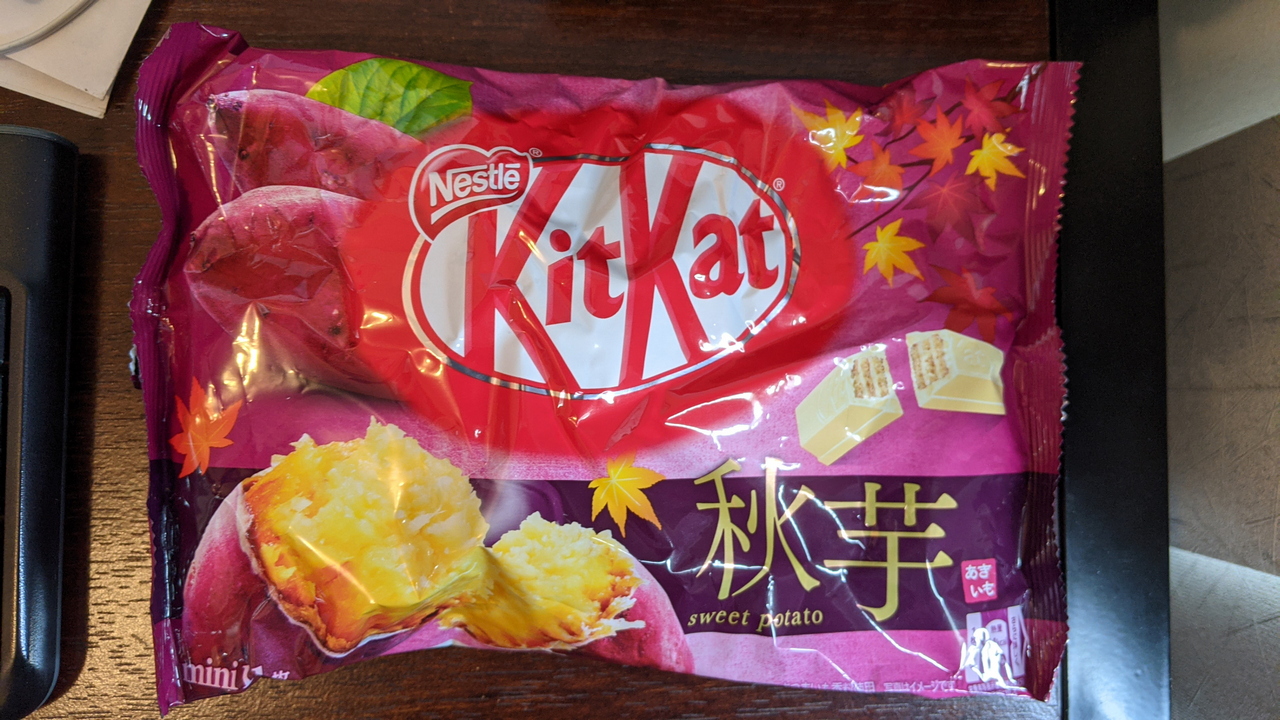 Nothing says fall in Japan like a roasted Sweet Potato which is why it's little surprise that the name of this flavor consists of the characters for "autumn" and "potato". This flavor isn't the orange sweet potato that we're familiar with in the Americas but the sweeter and nuttier tasting Japanese Sweet Potato or satsuma-imo (サツマイモ). Alright let's have a taste. This Kit Kat is a mild white chocolate sweetened with Japanese sweet potato. It's a delightful blend of flavors that leaves you craving more. I would absolutely recommend it. 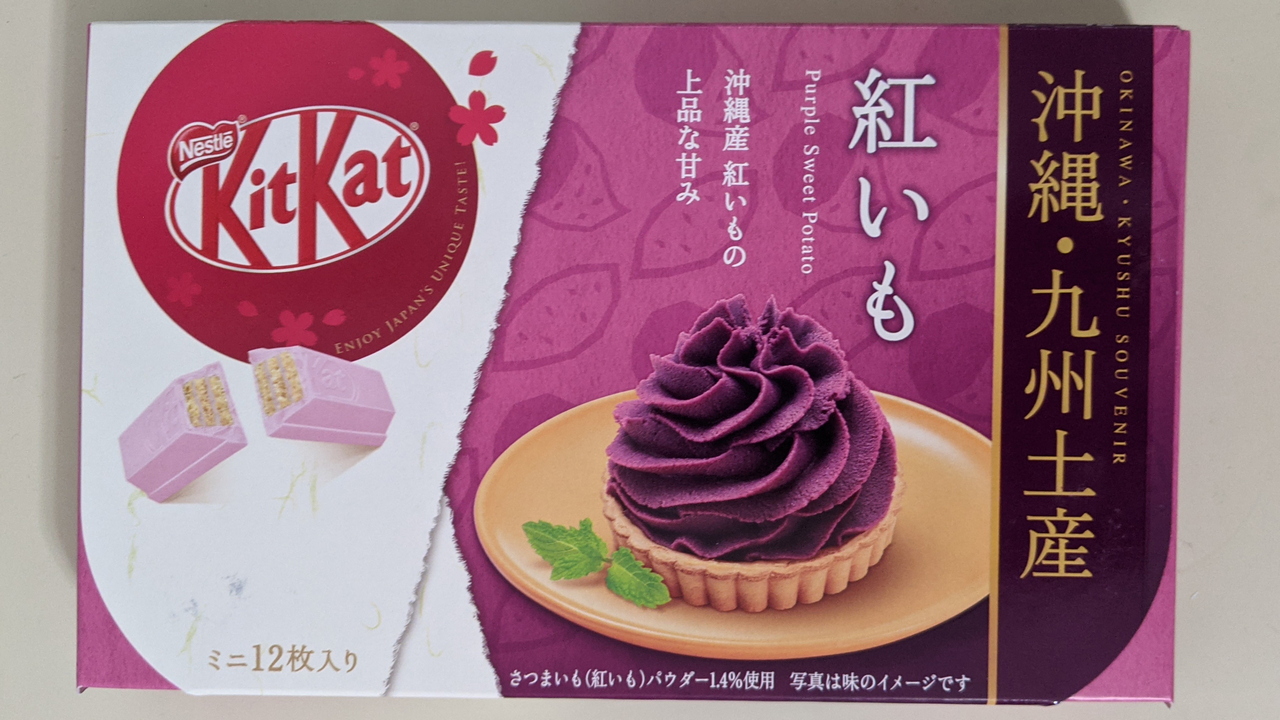 Just like Tokyo, Okinawa also has its own regional Kit Kat flavor. This one is based on beni-imo (紅芋), a sweet potato with a vivid purple flesh. They have origins in the Asian tropics but shouldn't be confused the other purple root vegetable, taro. They're significantly sweeter than both satsuma-imo and the orange sweet potatoes of the Americas. The Kit Kat itself is sweeter and has a lot less complexity than the Sweet Potato flavor. It also has a lovely purple color. This is my favorite "sweet potato" flavor. 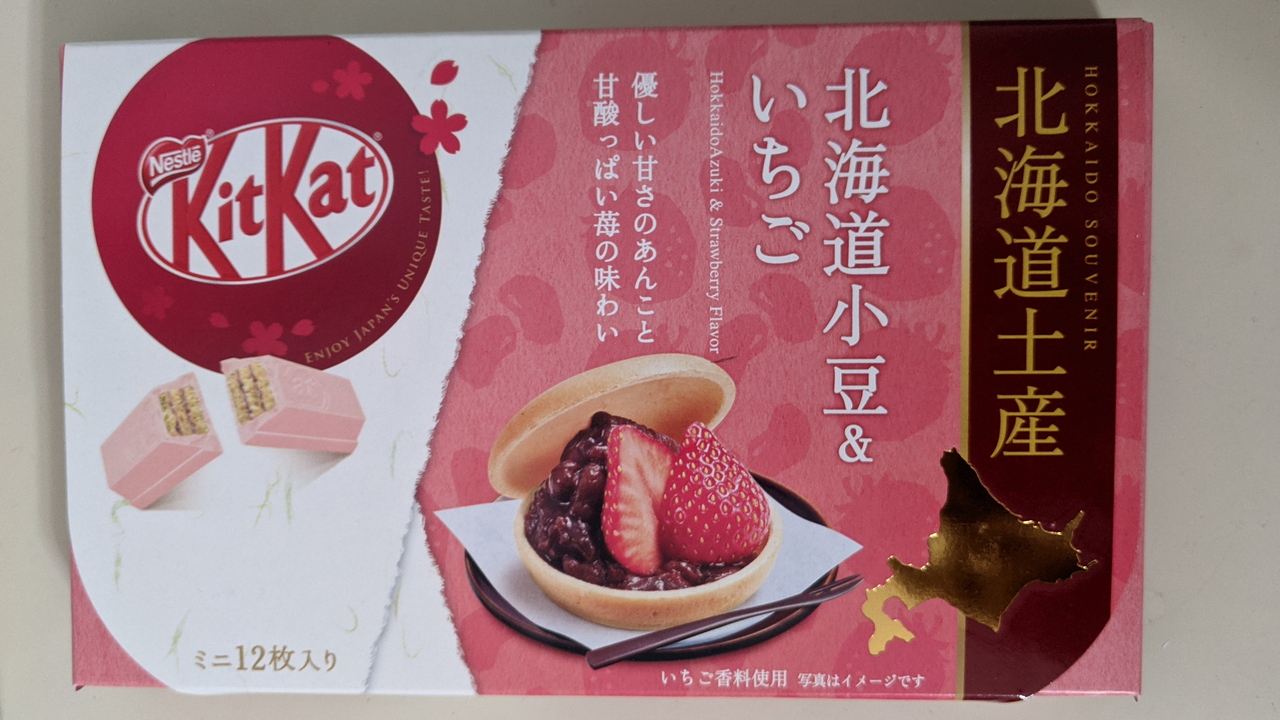 This is Hokkaido's regional Kit Kat flavor. Like with many of the other strawberry-based flavors, the strawberry scent and taste is very prominent. Supporting it is the much more subtle flavor of red bean paste, made from the titular azuki beans. It's a delicious Kit Kat with a bright flavor that highlights Hokkaido as an agricultural powerhouse. The region produces over 93% of all azuki in Japan and grows strawberries in it's southern and central regions. 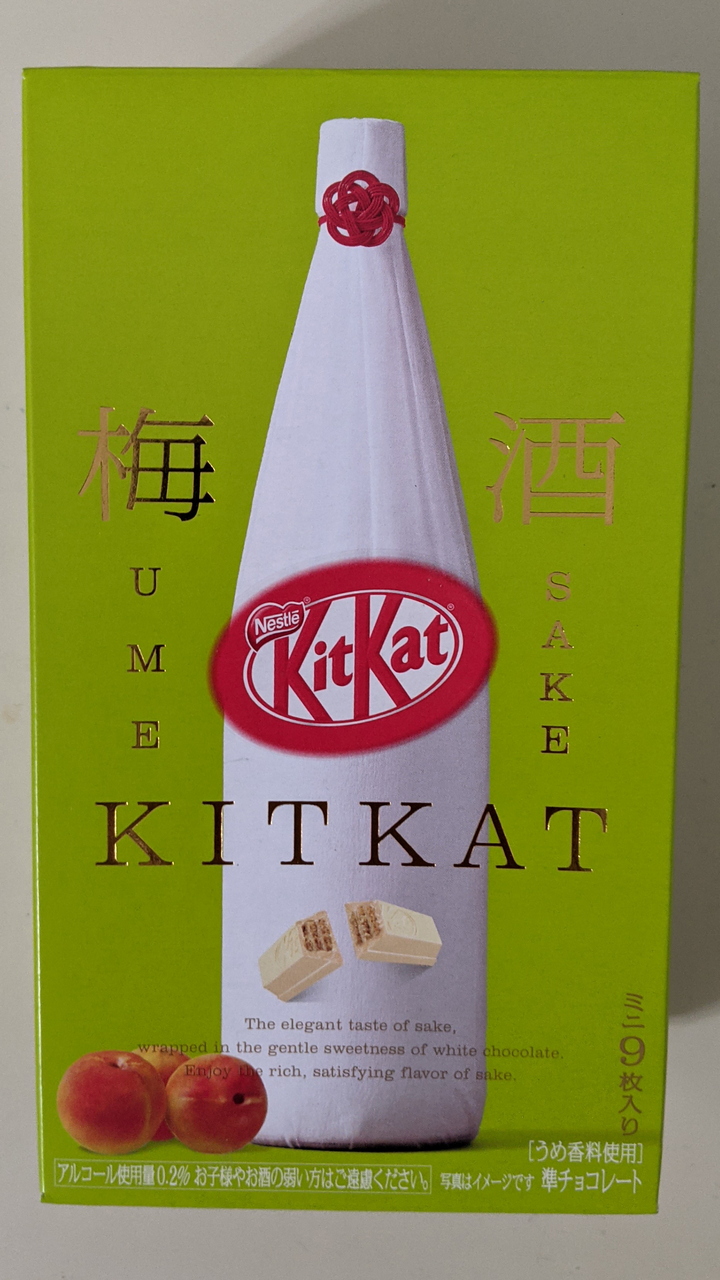 Let's try mix things up with a more adult flavor. Ume is a fruit related to plums and apricots that's known for its sweet and sour taste. When unripened ume are fermented in alcohol and sugar for several months, it forms a liqueur called umeshu. It's often marketed as "plum wine" in English. Since the word umeshu uses the characters for "ume" and "alcohol" when written in kanji, It's fairly easy to guess how they decided to name this flavor. The Kit Kat itself is an absolute delight. The alcohol content is much lower than the other "sake" flavors I've tried which puts flavor profile front and center. It is a perfect balance of sweet and tart, combined with a smooth white chocolate. This is certainly my new favorite "sake" Kit Kat flavor. 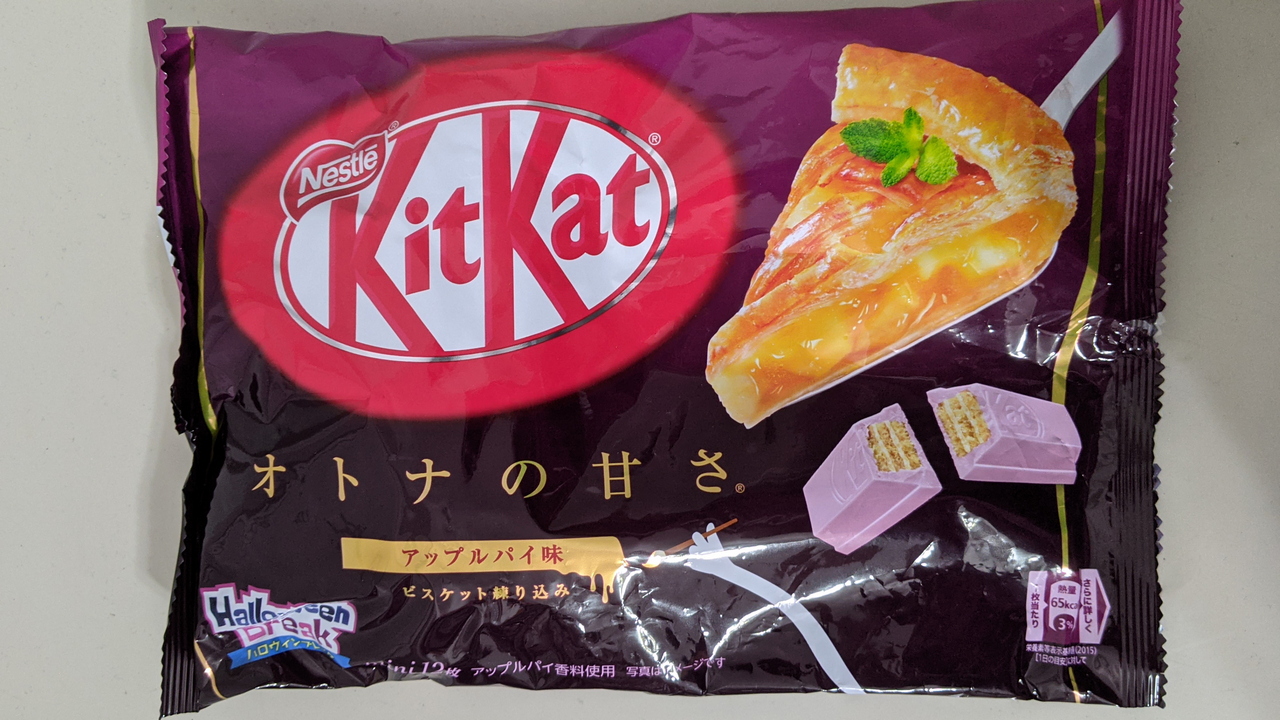 Apple pie is a dessert that is so deeply tied to the American identity that it's arguably synonymous with it. (Ironically, apple pie is a dessert that was brought here by the English and the Dutch in the 17th and 18th centuries.) This leads to the interesting question, why does flavor of Kit Kat not exist here?! In other pressing questions, why is this flavor branded for Halloween??? I may never know the answers. However, what I do know is that it is uncanny how similar to Dutch apple pie this purple Kit Kat tastes. Although the cinnamon overpowers the scent and taste of apples, the flavor is unmistakable. This Kit Kat is certainly a novelty. 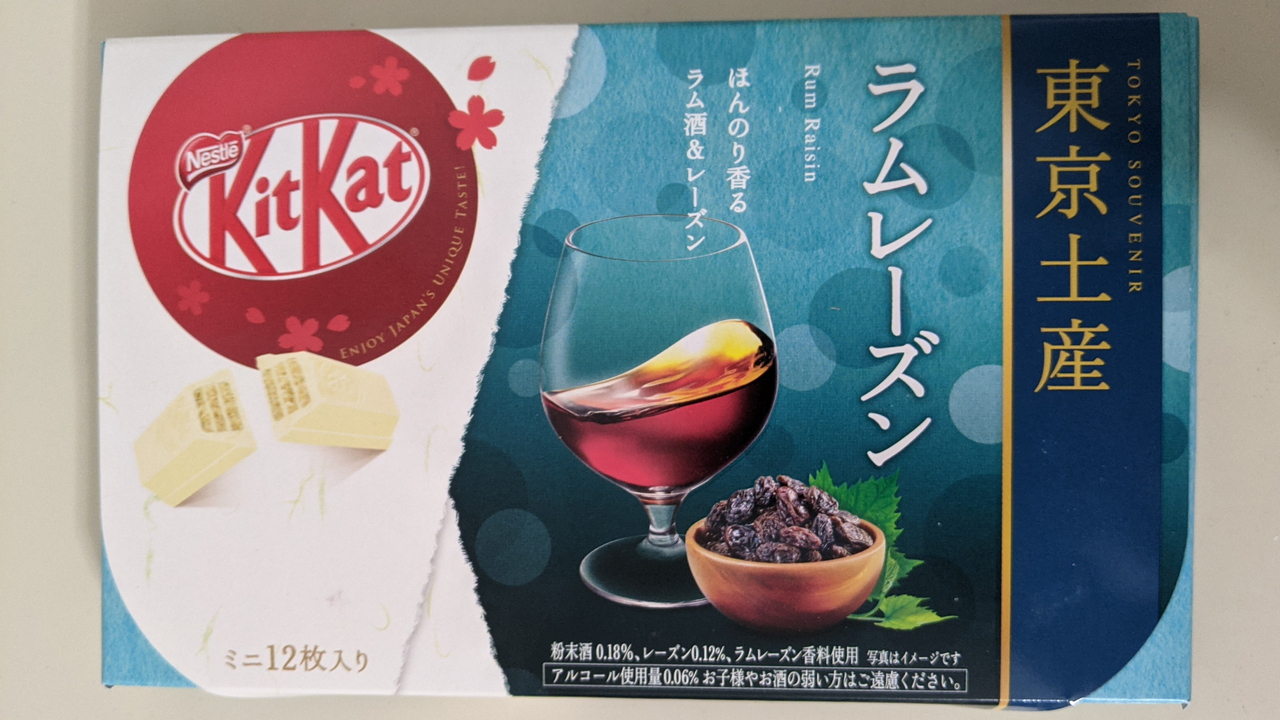 I didn't think think much of it when I picked this flavor up while exploring Sapporo, but apparently it was once is a limited edition flavor. Now it's made its return as a Tokyo souvenir flavor. As far as I know Tokyo and Kyoto are the only places with more than 1 regional flavor. The Rum Raisin Kit Kats do have some alcohol content as well, so they're true to their name. Although rum raisin is popular ice cream flavor in the States, I can't say that I've ever tried it so I don't have any reference point to compare it to. However, this Kit Kat is tasty. Upon opening the individually wrapped package you're nose is greeted with the scent of rum. Further inspection shows that the mild white chocolate compliments a strong grape flavor with subtle notes of rum. It's pretty neat. 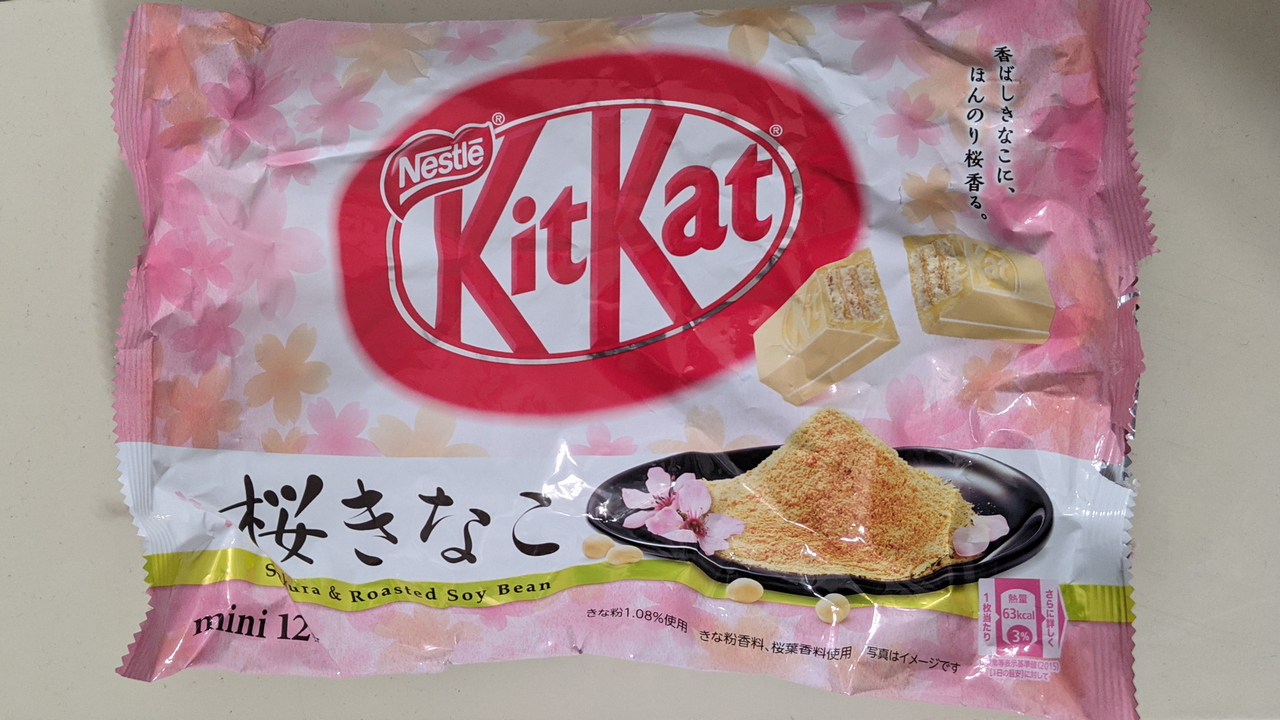 Before I get in to this one, I'd like to note that this is a flavor that I have absolutely no reference point to compare against. That being said, this Kit Kat has a rather complex flavor profile with nutty notes taking center stage. It's supported by a mild and sweet white chocolate. Sakura generally isn't a very pronounced flavor on it's own and is completely overshadowed here by the roasted soy beans. In smell it reminds me slightly of Reese's Pieces but the taste is much fuller and deeper.