Despite all the trials and tribulations I've faced so far on this production, the actual shooting portion of the production had yet to begin. So with the unresolved troubles of Beijing still looming in the back of my mind, I woke up on the morning of November 6th expecting the worst.

When I was first approached about this project, I was asked to be a photographer. However, a mix of circumstance and last minute changes to the project's scope and location solidified my place as a production assistant. The final plans scheduled the shoot for a single day making the whole affair a high-stakes, all or nothing type of situation. These changes also called for all of the assistants to be in Tokyo while shooting was happening. Meanwhile, everyone else would be on location at the Iyashi no Sato Kiyashiki ryokan in Kumamoto Prefecture which is on the other side of the country. It would have been an understatement to say that this decision left me apprehensive. However, it was out of my hands. All I could do is hope that it would work out by some miracle.

The Journey South
Before the shoot could begin, the models and photographers had to get to the ryokan. It should have been a simple ride on a bus from Hakata Station in Fukuoka down to the Kurokawa Onsen area in Kumamoto. I had asked Taro to reserve tickets for the bus a couple of weeks ago to ensure there would be no problems. The assistants saw the models and photographers off and then decided to kill some time before heading to Tokyo. It was during this downtime that we all realized how much we really wish we could go to a ryokan too. We gave in and rearranged the plans we had in Tokyo while on our way to the train station.

Once we arrived, we contacted the main group to let them know that we were going to go to our own ryokan with blackjack and hookers for some rest and relaxation. They said they were taking the train down to Higo-Ozu and that we should meet up with them there. I was still a little out of it since it had only been half a day since I arrived in Japan, so that didn't set off any alarms in my mind. Upon rendezvousing with the main group, I immediately regretted not noticing the problem sooner. It turns out that although Higo-Ozu did have a bus line to Kurokawa Onsen, it required that tickets be be reserved at least 24 hours in advance. There was no other form of public transportation in that area, leaving the production stranded just over 50 km from its final destination. 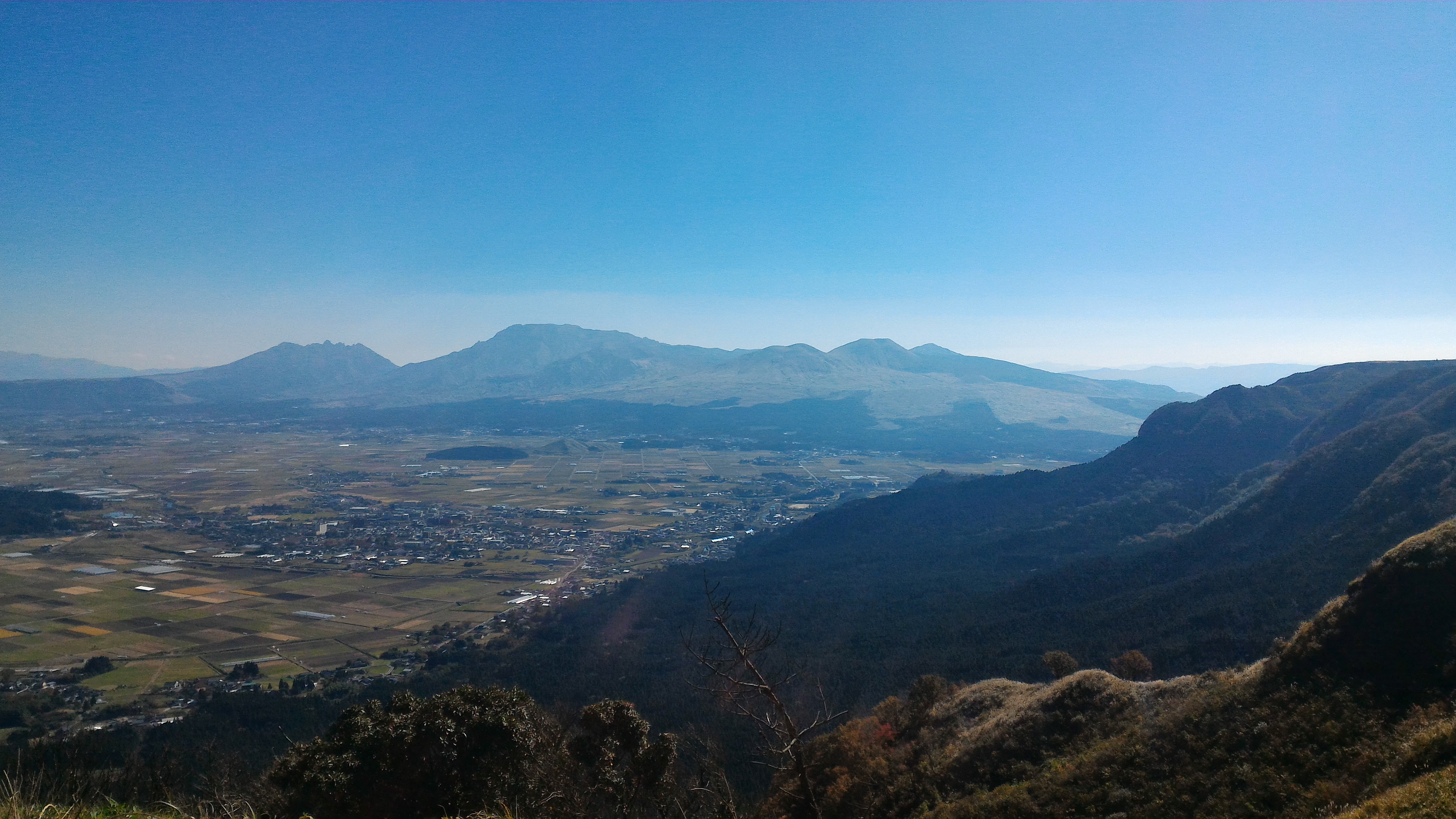 The view of the mountains was stunning.

After interrogating Taro, I discovered that he made undocumented changes to the route in order to save money. On top of that he also neglected to research whether bus tickets could be purchased on site. That left us with 2 options, either cancel the entire production or call a taxi (which are notoriously expensive in Japan). We decided to shell out the money for a 1.5 hour cab ride up into the mountains. The fare rang up to over 20000 JPY but Taro covered the bill, which was enough to keep me from murdering him on the spot.

I've learned not to ask anyone to do anything without verifying that it was done myself. But at least we were finally on our way again and in a jumbo taxi to boot! 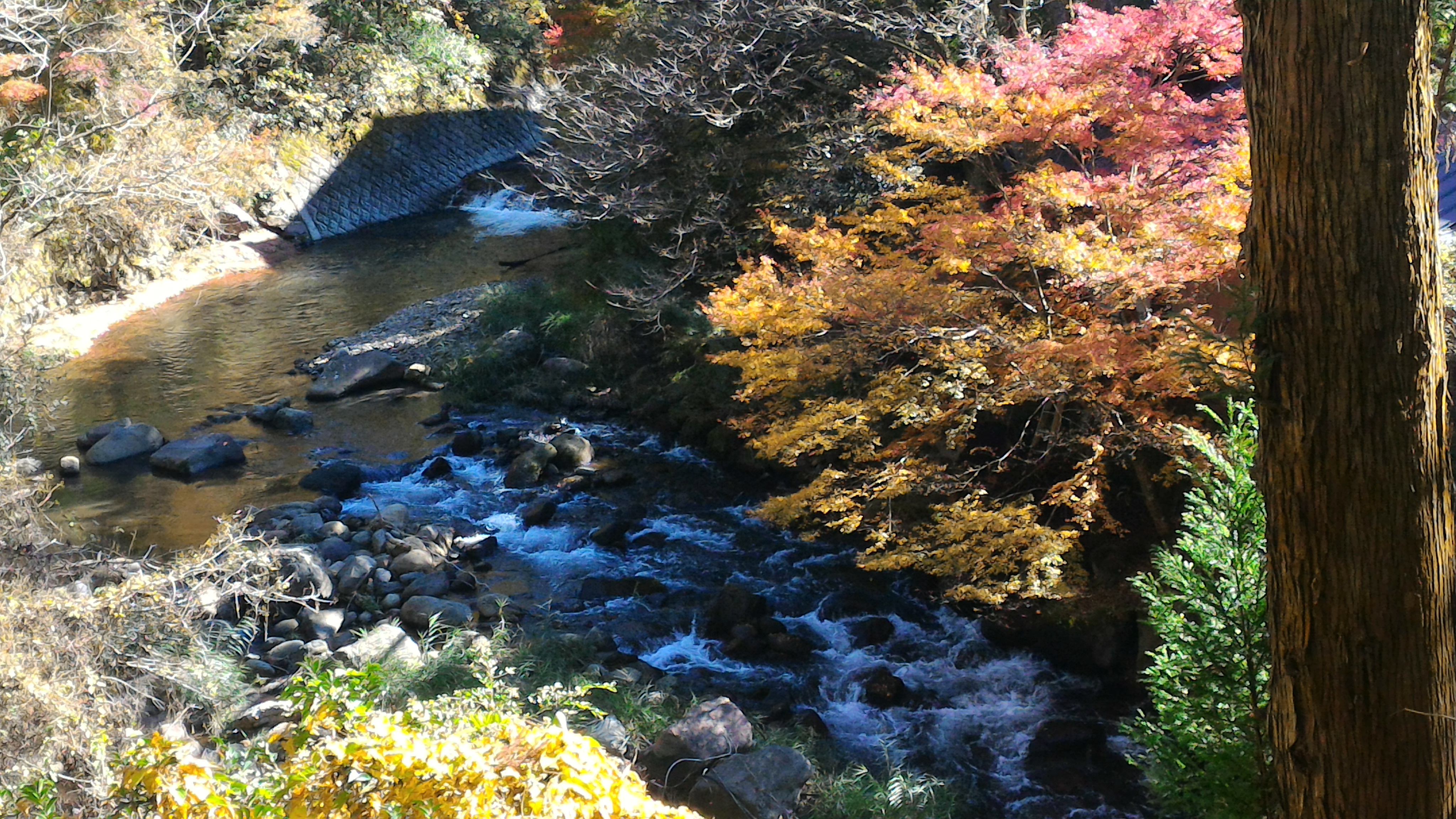 A 15 minute walk they said… It'll be fun they said…

We finally arrived at Kurokawa Onsen, slightly worse for wear. The ryokan where the main group would be staying was the one at the highest point in the area, so we walked uphill (Is it really "uphill" if there are inclines steep enough to disable car alarms?) with gear and luggage in tow. The assistants decided to stay at the same ryokan as the rest of production, so now we were all together and on site. All that remained was the reason we all came out here, the photoshoot. 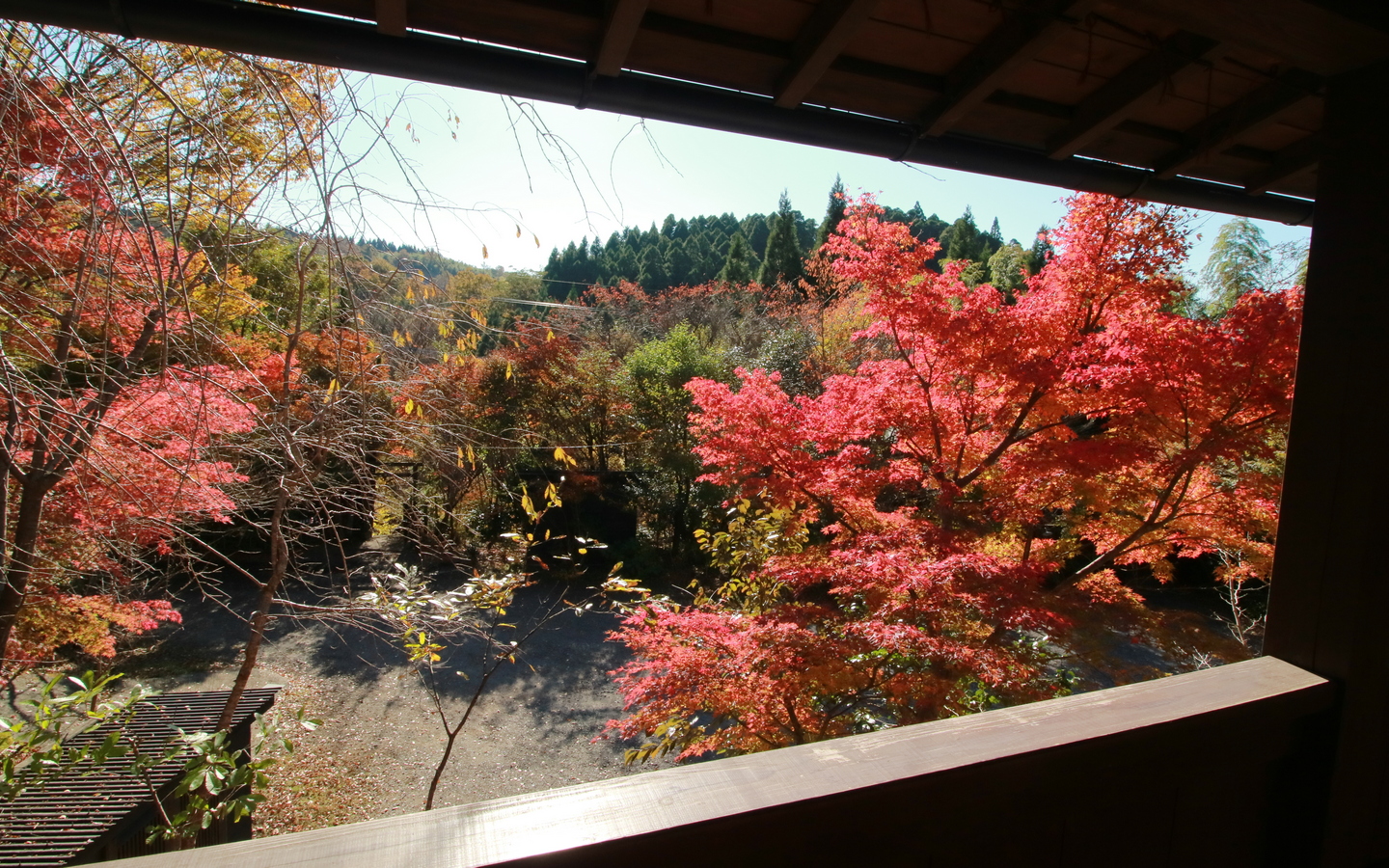 The view from the ryokan was worth it

There wasn't too much for me to do at this point, the photo equipment was being set up and hair and makeup were being done. So I ordered the bus tickets for our return trip the following day and then went on a konbini run to get snacks. After snack time things kicked in to high gear and shooting began. That's when we decided to get out of the way and enjoy the hot springs before dinner. 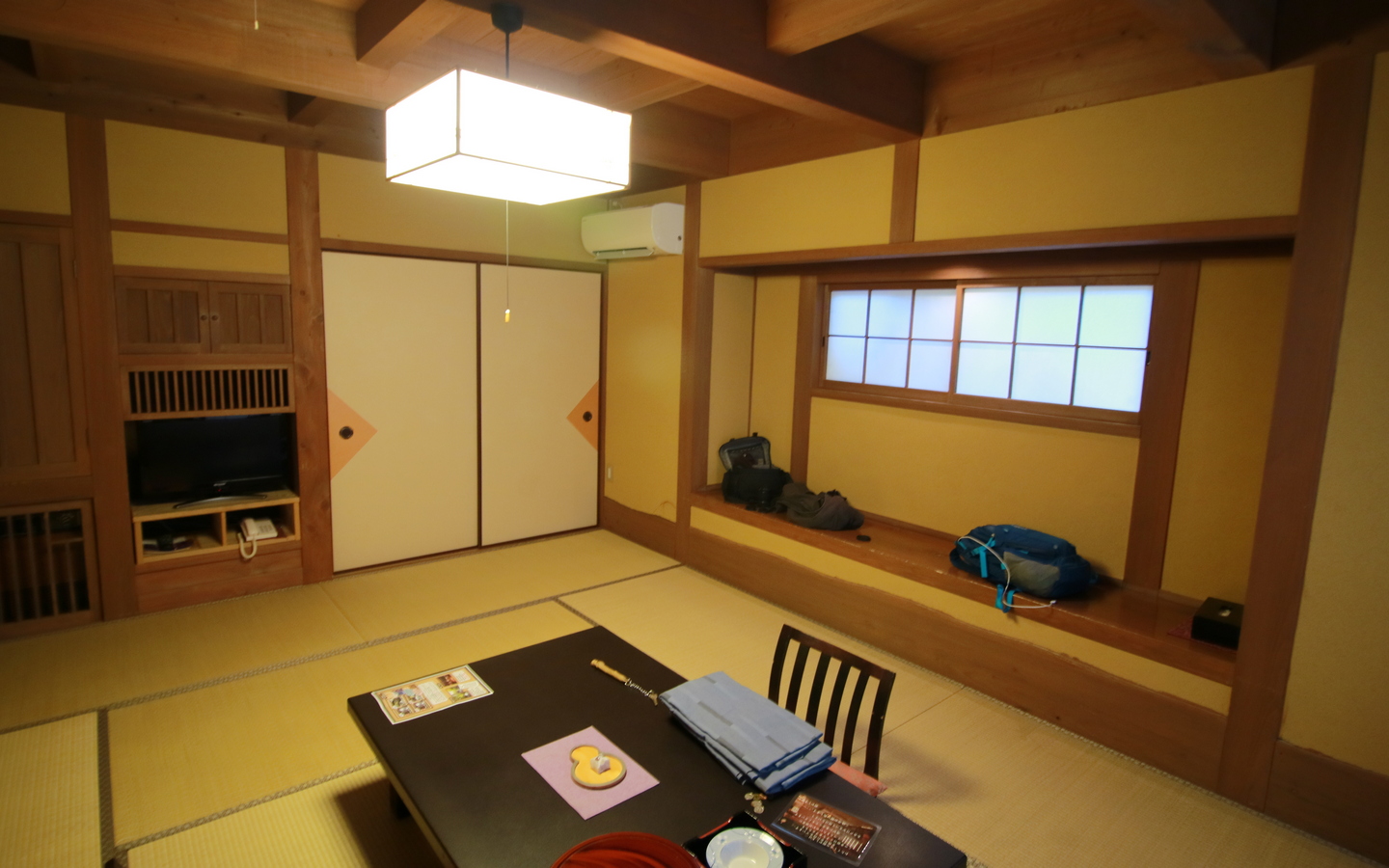 Us assistants had a great room!

The ryokan was the epitome of joy. The warmth of the water, the smell of the Hinoki (Japanese Cypress) framed buildings, and the cool yet gentle breeze blowing outside melted all of my stress to away. I went in to the onsen with a headache and came out refreshed and with a new appreciation for life. 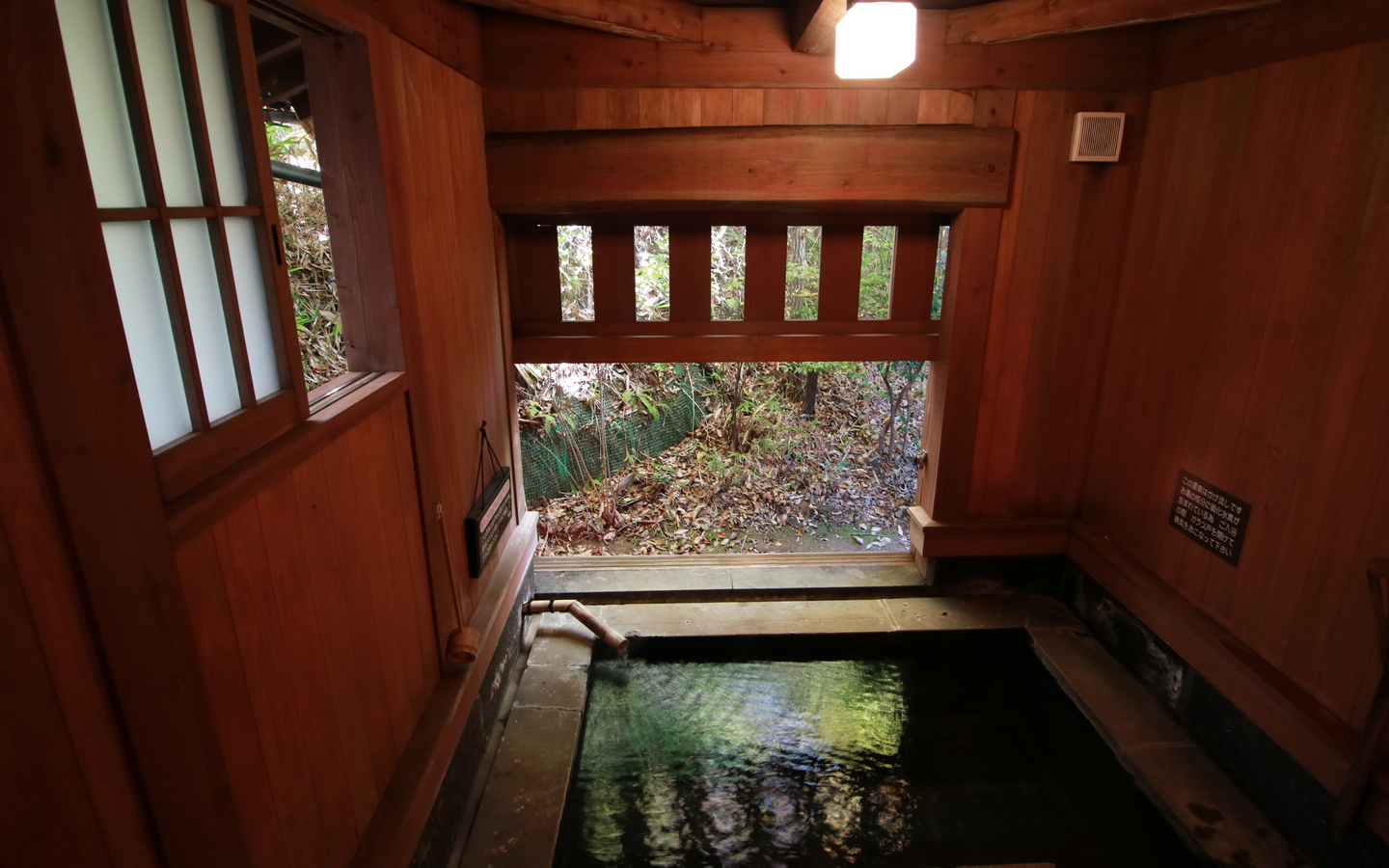 Every room has at least one private hot spring bath.

After lazing around in the bath while the rest of the team was hard at work, we all reconvened for dinner. In true ryokan fashion, dinner was a grand event consisting of what must have been 8 delicious courses featuring a number of seasonal dishes. That was followed up with an assortment of delectable desserts. The experience was supreme bliss. The clamoring in my heart and soul caused by Taro and Beijing had finally been soothed to the fullest. 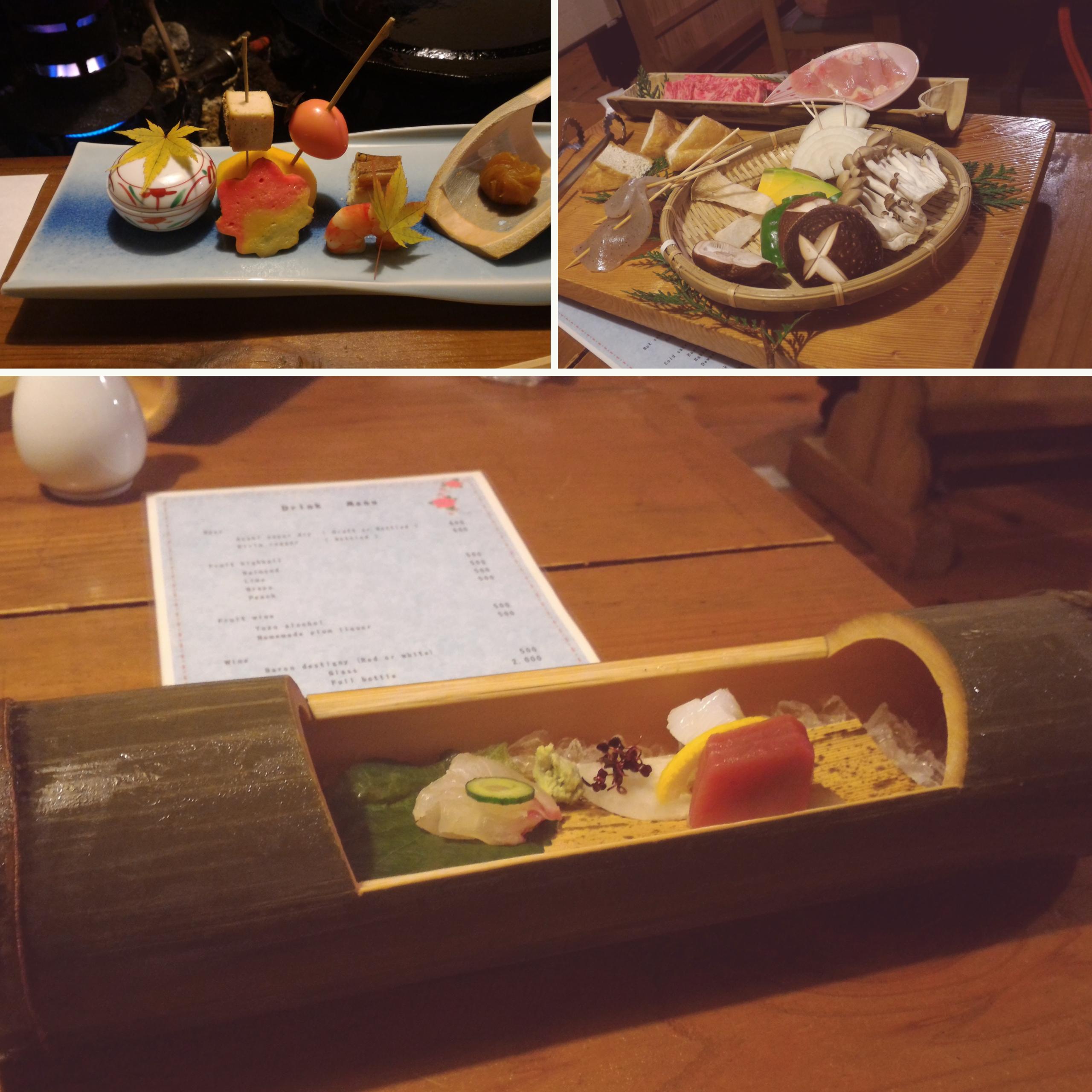 The food was glorious! 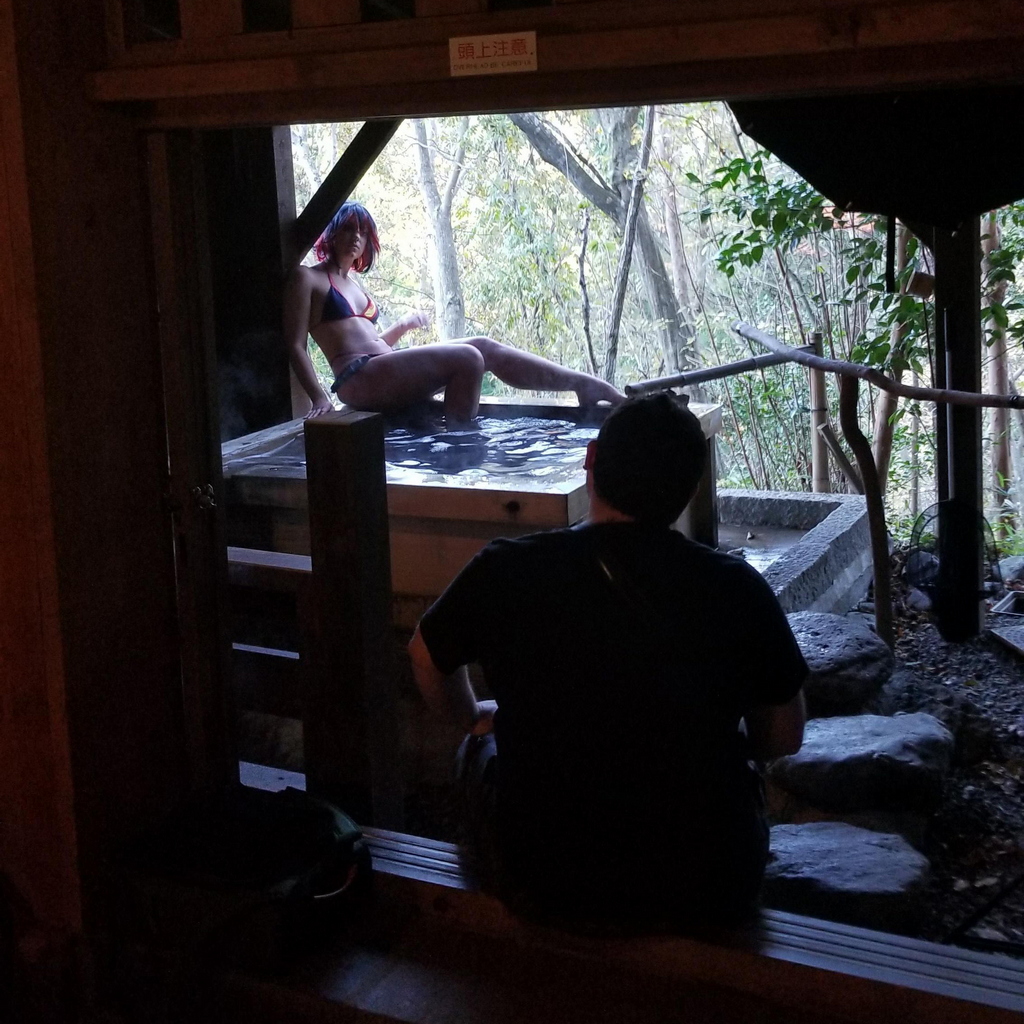 Marc shooting up a storm. Photo by Sweets.

After dinner the photoshoot went in to full swing. The shoot lasted through the night until about 3 AM. I'm amazed by the hard work everyone put in. お疲れ様でした！ I'll be looking forward to seeing the results once we go in to post-production. The following morning, we reluctantly packed up and headed out. It was time to finally go to Tokyo and be tourists.